First off, let me just start by saying this build isn’t for everyone BUT if you’re a full-fledged coffee-holic like me you might just want to give it a try! The build portion of the project is actually really simple once you have the glassware. That’s where the bulk of the budget goes for this one. What’s cool about this project is you could modify it however you’d like and make your tower contraption as detailed or as basic as you’d like. For this one, I went super basic because I was outside the shop for the build. Check out the video above, and then let’s go into the details! 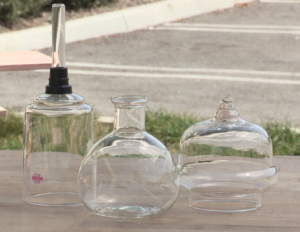 The “beakers” I used in this build all from Amazon.com
All the glassware for this build was purchased on Amazon.com. The majority of it is from a company called Yama which is a Japanese company that focuses on these types of cold brewers and was the inspiration for this build. They sell completed systems already assembled for anywhere from $250-$450 so rather than spend quite that much I thought I’d build my own.  You could even go cheaper than what I did by buying a cheaper chemistry set or something or making your own beakers out of other materials if you wanted but here’s what I bought.

All in the materials cost about $150. It’s a lot for a coffee maker but this is more in line with something at a coffee shop probably than personal use. I still think it’s cool and I’ve used it a bunch of times already and really enjoy the coffee it makes. Plus it’s like a wacky science experiment going on in your kitchen which is also kinda cool.

This one was pretty basic build. Watch the video for the detailed step-by-step build instructions and showing what I did, but the basics of it were as follows.

Now I’ve never tried to brew cold brew coffee before. It’s a skill for sure! First I cut a couple pieces of coffee filter to size and set them in the middle beaker. One on the bottom to keep the coffee from pouring out and the other I wet and placed on top of the grinds. I read it was good to do that to disperse the drip. I first tried like a 5 hour drip with a coarse grind and it was good but ended up being a little on the light side. So for the next attempt I tried an 8 hour drip with more of a medium grind. That was also good and smooth but I wanted even more so the third time I did a 12 hour drip with a even finer grind and THAT WAS MONEY!!!

Overall I’m really happy with the way this thing turned out and the coffee it makes is delicious. I’m still an amateur when it comes to cold brew but now that I’ve got a setup I can really dive into figuring it out!

I hope you enjoyed the project and if you have any questions or wanna just chat coffee or cold brews that I should try, hit me up on Instagram @mrfixitdiy or on twitter @mrfixitdiy.

Thanks for checking out the post and happy building! 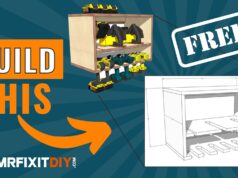 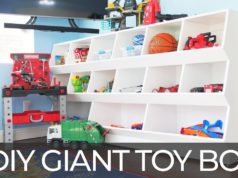 How to Build a DIY Giant Toy Box 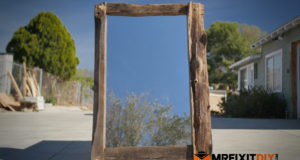